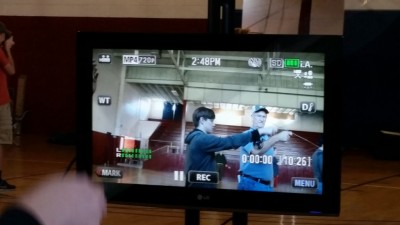 Forced Turnover Versus Pulling the Rod Through in Fly Casting

These ten most common short pieces are what I perceive as the biggest faults which I have witnessed over the years teaching thousands of folks to fly cast at conclaves, fly fishing shows, fly fishing schools, college programs, and guided fly fishing trips here in Bryson City, NC. This first piece has everything to do with acceleration for the tech folks for the delivery cast. For the non-tech folks, think of this as developing a rate of movement you attempt to maintain tension throughout the line from where you begin and end the stroke.

This is used in diagnostics for understanding why lines get knotted (tailing loops), why a loop falls out of the sky, why the line does not travel straight, and many other common casting problems. Nice loops in fly casting will require you to understand tension for all casts. Naturally, the best way to perfect this simple concept is to actually get in the yard and practice it.

This post deals with one of the common attributes of forced turnover. There are others for a later post in a future article. This first example can be responsible for many knots in the fly line or leader (tailing loops). The wind knots are a by-product of forced turnover. The biggest drawback to forced turnover is when it is used for matching the wrong intent. It is actually a deceleration of the rod tip. Therefore, as an example, if you attempt to cast into strong winds a distance casts it will fail because it did not match your intent. Another way to say it is that you can not achieve high line speed fly casts with a stroke that is slowing down. forced turnover versus pulling the rod through

Here are three quick photos to illustrate the incorrect method of forced turnover that is very common for casters. 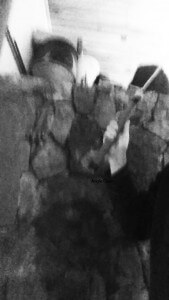 The forward stroke begins with a small angle between the forearm and rod butt.

The butt angle has already closed to the forearm before the stroke is even halfway complete. 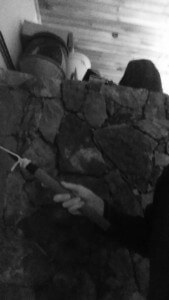 Completion of the forward stroke and fly line lands in a huge pile since the fly line follows the rod tip. This common problem is associated with the forced turnover of the rod butt far too early.

This topic receives much attention from instructors because the rate you move the rod during the cast dictates the rod tip path scribed in the air. The fly leg of the loop will be a clone of the tip path during the stroke. If you desire a nice narrow loop then the straight tip path is what you practice. Narrow loops propagate and morph more smoothly than erratically shaped loops-hence they are more efficient in flight.

Forced turnover fly casters are plentiful with the thumb on the back of the cork for trout rods. The thumb pushes the cork often times as the stroke is in the beginning stages. This leads to early rod rotation. The big flaw with this type of casting is that it becomes harder to be S–M–O–O–T–H! It usually leads to excess residual power wasted in deeper counter flex and rod rebound.

Forced turnover has been described by many instructors with various terms over the years. Descriptors such as early rotation of the rod, tip flex casters, rod womping, rod wooshing, and improper acceleration all fail to load the rod butt. Forced turnover equates well with early rod rotation. It also places the rod tip closer to the rod hand because tip casting fails to bend the rod butt.

Casters that use their wrist for rod rotation as the rod begins to move will never make efficient casting strokes until they reprogram their basic stroke. Greater loop speed and distance casts are difficult to achieve with a forced turnover. This is the most common problem with folks that try to tip flex the rod when making their basic stroke. We have all seen trout casters whipping the 30 foot cast wildly with too much wrist action on the stream employing forced turnover of the rod. As soon as they lengthen it out a few feet more random chaos takes over.

Forced turnover of the rod is indicative of the mass population of casters still working on trying to improve their foundation fly cast. The majority of struggling fly casters fall into this category of tip flex casters that like to SNAP it by forcing rod turnover! The fly fishing equipment today with rods and fly lines are among the greatest that technology has ever produced so why not learn to make your equipment work for you on the water?

Pulling the Rod Through

Here is the correct method for pulling the rod butt through which forms nice loops and accurate casts.

Start of the forward casts. 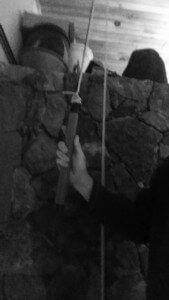 Pulling the rod through the stroke the angle of the rod butt and forearm remains the same.

The delivery cast tends to be your forward cast in fishing casts most of the time. The micro wrist movement is implemented toward the end of your stroke. Hammer a nail at eye level, flicking a paintbrush, or using a fly swatter all convey a nice word picture of this wrist motion at the end of the casting stroke. It might help you to think of throwing a javelin with the rod butt cradled in your hand.

This word picture gets the point across usually the best for pulling the rod through your casting stroke. Pulling the rod through always has the rod tip in the back of the hand and equates to late rod rotation. The backcast may or may not use a variable wrist movement depending on your casting plane. For example, a medium distance vertical traditional fly cast will use little minimal wrist for the backcast because the stop occurs when the bicep collides with the forearm.

Another benefit of pulling the rod through is that tailing loops disappear forever for the most part.

Efficient fly casting is really about understanding tension. Efficient tension takes place when one understands how to implement efficient rod loading. Your fly casting will improve once you understand the concept of pulling the rod through. Most of the casting geek jargon is really for the instructor community more than the general populous of fly fishers.

I have yet to use any descriptive definitions with both of my sons that began casting in the yard with me at around age 2. They are well on their way to becoming great little casters now at age 6 and 9. They have learned sound fundamentals for most of the fishing casts used on the water. The fishing casts remain heavily dependent on single-handed Spey casts for a quick change of direction casts.

Even with the huge deviance for types and styles of fly casts we use on the water, the one common ingredient that tends to remain the same for most of them is pulling the rod through the fly casting stroke. Many fellow instructors have coined this the foundational stroke of fly casting. This would be a great place to begin for all fly fishers! It is natural to use the large muscle groups first such as body lean, torso, lats, shoulder, elbow, and the wrist only at the very end of the stroke!

Far too many self-taught casters use only a part of their arm. Plenty of wristy and/or elbow casters in this category. Develop a full arm approach for more efficient casts on the water.

The Roll Cast Tells Us the Answer

The wrist is used less and less the larger the rod weights in general. A trout fisherman relies on more wrist than the saltwater fly fisher using a 10-weight rod. This is the number one difference between all the elite casters that I know personally and the general casting masses. All of them are smooth and deliberate for pulling the rod through the stroke!

A basic static roll cast is one of the best predictors that someone has perfected pulling through their stroke. The roll cast with 50 feet of line will either look easy to accomplish or fail. These issues stem from two choices of either a “pusher” or a “puller”. This in part, helps to explain why it is so important in the early stages to develop a fundamental casting stroke.