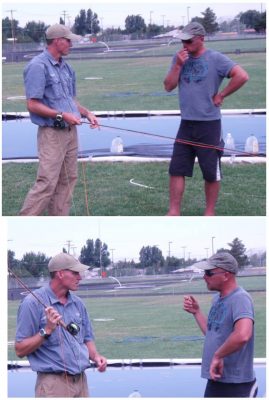 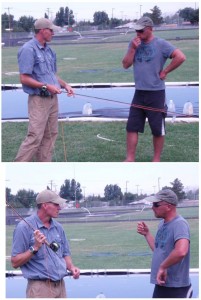 The fly casting model for the instruction of fly casting includes concepts for teaching all the components of general movements when teaching fly casting. These comments are the compilations of several buddies who put a great deal of time and thought into some definitions for a working model of fly casting. It is my belief that this model is powerful for its universal application for global instructors.

The beauty of this approach is the simplicity of how it is applied. In general, I have been a foe of rules in fly casting because they almost always break down. Even today, many of the so-called establishment groups of fly casting still hold fast to antiquated rules. As the ever-changing casting community breaks new ground for pushing the envelope for future generations, those still holding to rules will be light years behind in short order. Often more ironic is “rules” that work for some things and fall short in other areas.

Terminology for the Model of Fly Casting

The model below is different because they are not rigid rules set in concrete. For me, that makes it much easier to accept and apply when talking with other instructors. When I first learned about it last winter I went through most of the fishing casts I use on the water and it was a fun exercise to use the below model for describing each-thanks to Lee Cummings for explaining many of them in greater detail. The terminology for the model of fly casting applies equally well to both the linear and free-form casters (straight line and three-dimensional casters).

Fly casting is a three-dimensional sport. Most problems today stem from the straight line casters still adhere to straight-line rules (the world is flat thinkers-still think casting is two dimensional-fits nicely into the linear thinking mode). The three-dimensional casters (what if the world may be round-learn instantly you cast in three dimensions to deal with obstacles) are out there doing and teaching the fishing casts because that is reality casting. The later usually tend to be an artist, musicians, or what many call the poets of fly casting.

How can we expect the linear bunch to join the poets? This dimension jump will be difficult for the linear folks because it puts them out of their comfort zone of fly casting. If you fall into the latter, you cannot and will not ever change the straight line casters’ thinking. All we can do is maybe convert a few along the way by making them curious. We make them curious by doing casts that solve problems on the water while fishing. That is the biggest problem with the changing of the guard here in America anyway, and I would imagine all over the globe.

Some are totally fluent with circles and eights for exercises because they have abandoned rules. The model below works great with all of the Spey casts for the change of direction casts. I think the latter group of free-form casters are much more exciting to watch because they flirt right on the edge of extreme timing for solving locations on the water.

There is a forum thread at Sexyloops on this very topic which started today. My friend, Paul Arden opened up the discussion describing qualitative versus quantitative observations in regards to the model. The similarities of qualitative for the poets and quantitative for the linear folks was shocking after I read his opening post. I would have thought Paul was in my kitchen writing the thread from here!

He composed it at the same time I was writing this intro. I have been ready for the casting revolution for a long time now. It is all about to happen! Instructors from around the globe using a similar model for approaches in teaching. Work through the terms until you can apply them for all of the casts that you know. Enough intro rambling-enjoy the model!

An introduction to the definitions:

Our objective was to define a set of terms that we can use to isolate and describe the elements that go together to make fly fishing casts. Wherever possible we have used terms as they are already used by instructors and professionals within the fly fishing community.

An Overall Stroke includes a Casting Stroke and those motions needed to position rod or line before and after the Casting Stroke.

We have retained the conventional meaning of Casting Arc, which measures the change of rod-angle at the rod butt during the Casting Stroke.

We are aware of the debate around the contribution due to rotational and translational components of the Stroke and Casting Stroke. So, without prejudging the debate we have introduced the term Drag to mean rod translation with little or no rotation during the early part of the Casting Stroke. The inclusion of Drag does not preclude any argument being right or wrong on the matter of power but precludes a set of definitions based on the premise that the argument has already been decided.

Component parts of the Overall Stroke

We have adopted the term Drift for rod positioning and Sweep for line positioning. Specific forms of Drift and Sweep can be named, eg Slide – where the rod runs along the line towards the line hand and does not move a line is a form of Drift. Sweep is used often, eg the lift on a pickup and lay down; setting up a static D-loop; many motions in Spey casts and aerial mends are all examples of Sweep.

We believe that in our fly fishing context Creep is commonly understood as a fault and we have defined it accordingly.

We believe that these definitions will describe most if not all commonly used casts. The definitions are neutral on outcomes, meaning that the common fault finding processes can be applied to each element making the definitions not only descriptively powerful but also analytically powerful.

The use of soft boundaries between the component definitions reflects the judgment instructors in the field use when they seek to correct faults or offer advice to students. For example, what instructor would mistake rod repositioning (Drift) for a Casting Stroke?

The definitions retain the common understanding of the terminology used by most casting instructors. They do not require a re-education process for fly casting terms. The terminology is consequently more likely to be accepted by a broader base of instructors worldwide.

Stroke (or Overall Stroke): A coordinated series of movements which includes a Casting Stroke.
A Stroke starts when the rod hand first moves in the direction of the cast.

Casting Stroke: When the rod applies force to the line in order to form a loop.

Casting Arc: Change of rod-angle during a Casting Stroke.

Drag: Rod translation during the early part of a Casting Stroke
Drag establishes momentum in the direction of the cast with little or no rod rotation. (Not essential to all casting styles.)

Loop: A moving length of a line delivered past the rod tip, formed when the rod tip curves the line under or over itself.

Static Loop: A length of a line formed into a D under the rod tip.

Drift: To position the rod between casting strokes.
Moving the rod to adjust Casting Arc, Stroke Length or Casting Plane. Drift applies little or no force on the line.

Slide: A form of drift where the rod is moved along the line towards the line hand.

Sweep: To position the line.
Sweeping or pulling the line into position.

Mend: A form of Sweep after the Casting Stroke.
A mend may be made, either while the line is in the air (aerial mend) when the caster moves a line in the rod-leg of the loop, or later when the line has straightened or fallen.

Lift: An upward Sweep.
The primary purpose of Lift is to begin to clear line from the water prior to a further line positioning movement or Casting Stroke.

Creep: Unintentional movement of the rod in the direction of the next Casting Stroke.
Creep is a persistent casting fault where the rod is unintentionally moved so the Casting Arc and/or Casting Stroke Length of that cast are reduced.