Standardization of fly casting today may lead to stagnation over time. To evolve into the future the sport must address better instructors that are teaching why and how it actually works. There are so many examples of various styles out there today yet the mechanics rule all of them. In my travels fly fishing over the years I have observed that there are two types of anglers. Firstly, the most popular category is what we refer to as recreational anglers. Most all of us came out of this “mold” if you will. For me, my grandfather introduced me to angling at around 4 years old. For many, they remain recreational anglers throughout their life. Fly fishing takes us to beautiful places with people we enjoy being with on the stream.

This is usually the crowd that also looks shallow for answers to complex topics. The preferred techniques used on the water may include lobbing a bobber, a tight line rig, or a cast that fails to make the distance (even short distances), or that 12 mph wind that they just may not overcome on the saltwater flats. The industry feeds the recreational angler sayings like “fly fishing is so easy”, rules, principles, and other very oversimplified models to follow. Rules are usually driven by someones’ ego in the long run and become commonly repeated as if it is the “gospel of fly casting”. This is a dangerous path to neglect the simple principles of basic mechanics. These are topics that my boys have already covered in elementary & middle school. It is the application of mechanics combined with logic to grow in understanding and kinesthetics for your journey. 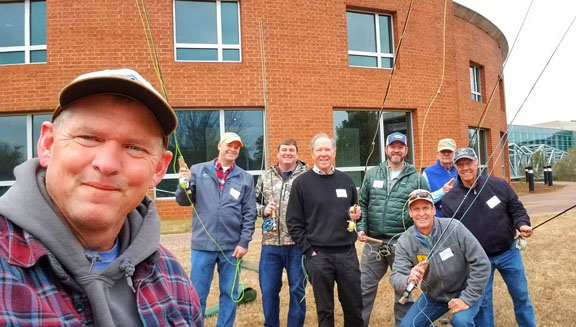 This approach often leads folks into a “rabbit hole” of stagnation. This is not a pleasant place to remain because stagnation may imply frustration. The self-taught fly fisher is going the long detour around the sport. You know the person that wants to figure it all out on their own. They might even commit to the free parking lot lesson at their local fly shop. All of these “free offerings” may or may not be worth your time. Just think about it, does Nick Saban coach the University of Alabama year after year to national championship games for free? His value comes from monetary compensation. There might be thousands of folks that want to coach such a prestigious program for free.

The small sliver of society that really wants improvement is committed to getting better. The dedicated fly fisher that “commits to improvement” is the second type of angler. They want to improve in all facets of the sport. They typically are not content with the entertainment of the sport overall because they value education. The educational approach will never fit into the mold of the bell shape curve of the recreational anglers. They get help from someone that can deliver coaching and mentoring. This may save decades of wasted time going at it alone. I get asked often on the road how long these improvements may take for fishing techniques and casting. It is my belief that it varies from person to person depending on their commitment and how driven they are to get it.

Many tasks are often attempted, usually neglected, & rarely perfected. You cannot change the game of skills such as shooting line, hauling, accuracy, and many others. You cannot change the rules of mechanics that limit or assist in launching you further as a fly fisher. The only thing you can change is you and how you go about playing the game of casting. For some, they can do the kinesthetic without really having an understanding. Kids fall into this nicely in that they can form nice loops in short order with simplistic instruction. For the cerebral casters, they may understand it well, yet there is a lag on the kinesthetics due to not enough myelin developed based on repetition. 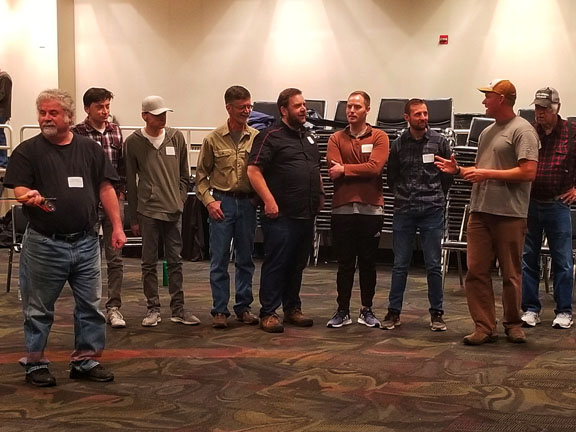 Legends in the Making

There have been many young people who came through the Team USA Youth Fly Fishing team clinics that achieved World Championship status in short order. There were many folks that invested time with these young people and they became very proficient in less than three years. The first youth world champ was Norm Maktima who was mentored under Davy Wotton. My own kids Connor and Duncan Brown started fly-casting at 2 years old with proper technique. Chris Korich has done a phenomenal job with Maxine McCormick winning all types of gold medals in the world championships. She has set the bar so high that I doubt it will be broken for a long time. Other mentors to me as a kid did the same with their own kids. Jason Borger was around casting all the time and taught by his dad Gary Borger during clinics. Doug Swisher who also penned many great fly casting books in the 1970s taught his son Randi Swisher. Steve and Tim Rajeff had an impressive introduction at the Golden Gate casting club at 14 years old with Mel Krieger. Were these iconic figures self-taught?

One of the finest moments all winter long at shows on the road was watching Gabe Wittosh casting in Atlanta, GA. Fantastic casting that he picked up through his years competing for the Team USA Youth Fly Fishing Team. He is driven and practiced to attain these skills over many years. He put on his own show on the “pond hog” pool with static roll casting over the end of the pond with ease. When the recreational anglers see that they gather around in a hurry. Brilliant to see the efforts of years ago paying off big today. Great to see him and his folks while there in GA. 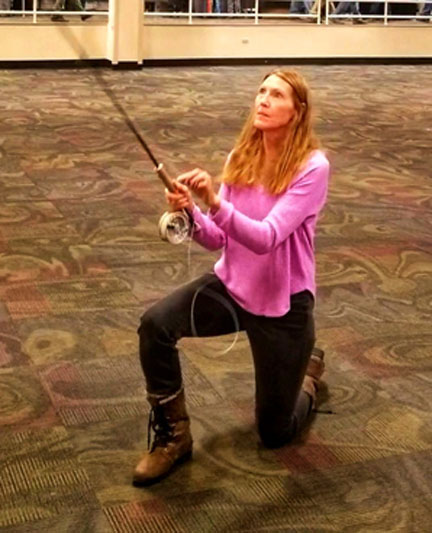 Carol perfecting her default stroke during the Fly Fishing Show in Denver, Colorado

Which Train Are You On?

Anyone can get on the train to improve in short order and prevent spinning in circles down the same track. Get youth into the sport at a young age because they are super quick to teach as are women. Men have a bit of a disadvantage in the early stages of learning to fly cast because they are indoctrinated with a projectile sport. In fly casting, we are dealing with a loop of line that is accelerating the fly. In throwing sports, to go further means to throw it harder. So the basis of efficient fly casting has to break the mold of more power is always better. We try to get the student to appreciate the concept that “less is more” when teaching how the loop unrolls.

Those that seek the value of education to raise their skills want to become proficient. This path requires practice on your own. I have thought for years how to attempt to motivate fly fishers. Part of this dilemma is the “imaginary perfection” that the recreational anglers remain stuck in for a lifetime. There are hundreds of examples in our sport of fly casting. The shooting line technique is common when fishing. The majority of recreational anglers would perceive their abilities already know this and actually feel as if they are skilled. Yet it remains that proper technique may shoot 40 feet of line while the recreational angler is still at 4 feet. This task will require practice and a work ethic to improve. If it remains incomplete for decades it will hamper your abilities on the water.

The recreation anglers buy into the overwhelming information highway. Think of the tips & tricks off of the world wide web. You know YouTube, Vimeo, a post of exotic fishing destinations or that elusive “magic fly”. I have often wondered why people choose this route when they do not have the knowledge developed yet to discern good or bad information? This is another “rabbit hole” of spinning your wheels full of unnecessary sayings, rules, principles, and concepts that may or may not lead you to where you want to be.

The late Lefty Kreh told me that he believed 90% of the recreational community would not benefit whatsoever from buying a $1000 rod. I do believe this statement to be true. Take the top 5% of elite casters and they will cast the cheapest of outfits well. So, there are real skills out there to master like learning proper rod load, shooting & hauling the line, curves, mends, etc… which matches your intent while fishing. Improving your skillset is all about you and you alone. If you really develop elite proficiency then I assure you that you will have a more satisfying experience actually fishing.

The first step is to separate your line control practice to grass & water sessions actually practicing casting. Most guides have to make do with whoever they have throughout the year and I can assure you the bar is lower today of skills than ever. Just watch the efficiency of one’s actions on the water if they minimize the number of steps to prevent unnecessary false casts. standardization fly casting 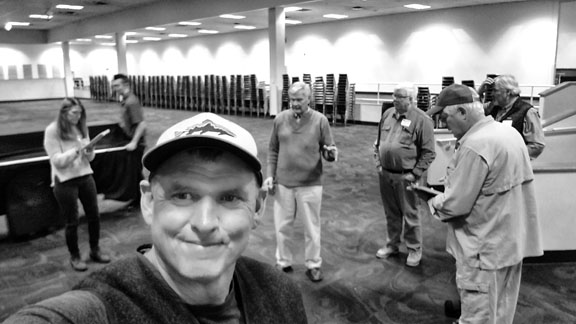 Remain A Student of the Circle Game

The more you know, the more you do not know. When we think we know something, we end up diluting ourselves. Draw a small circle, the thin line around it is the border of all the new areas we could learn something new. Now draw a circle that is twice as large. That thin line of what we do not know has increased by 3.14 (pi). This is a fascinating journey when we remain flexible to keep pushing forward. Thanks to my father-in-law Jerry Jennings for the concept of the circle game used in education. He has taught psychology at Berry College for many decades. It often leads us to more questions than answers at times. It is natural to have peaks and valleys with the relationship of understanding and the action of doing it. The joy lies within the journey always not in an endpoint or destination. standardization fly casting

It is for this reason that it makes life interesting always remaining a student of the game. It raises the bar so to speak for your personal skills at the same time while exposing you to new areas that you might want to discover through exploration. Those that remain in the simplistic view of rules and principles that break down lack the ability to grow. Standardization in fly casting today will always be around, so the real question is how long will you hold fast to these false beliefs? So remain the farmer planting seeds for growth to evolve and flourish ahead during your journey.

“Every time you double your knowledge on a subject matter, you introduce three times the information that you do not know”

I have loved teaching the classes on the road and the clinics in Bryson City, NC since 1987. To facilitate this process with students from all walks of life interested in moving ahead is exciting. It also solidifies those going in circles that remain stuck in stagnation that those are not my peeps until they wake up and seek more. Looking forward to the last few fly fishing shows of our winter month class series in Pleasanton, California (2/20/20) and Plano, Texas (3/20/20) and the two-day advanced fly casting class in Bryson City, NC (3/27,28/20)(click the links for signups). It has been a great winter working 8 of the largest cities in the country evolving the sport thus far. Excited to be going to the home of the golden gate casting club with their rich tradition of our sport. This region influenced me as a kid with Jim Green and many other greats that raised the casting bar for the world. It has been a great experience teaching with Gary Borger over the winter and incorporating some new concepts into our programs. standardization fly casting