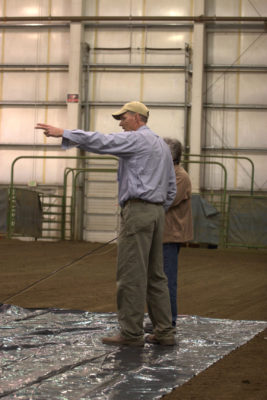 The Fly Fishing Northwest FFI Expo in Albany, OR

The Fly Fishing Northwest FFI Expo Albany, OR was a great event! Left out of Bryson the morning of the 8th at about 3:00 AM. Drove one of the curviest highways in the country called the tail of the dragon on US 129 to the Knoxville airport. Never passed a car until the town of Maryville, TN. Many large groups of whitetail on the road and one cougar leaped across the road in Stecoah Valley on Hwy. 28. The drive was full of wildlife at 3:30 in the morning along Fontana Lake with the band “New Grass Revival” turned up on the high fidelity waves and a thermos of java for the road! It may not work for everyone but that wakes me quick.

After a long flight to Portland, OR, it all went by way too fast! Seems like that is what always transpires when you get around a bunch of other great casting folks that love to fish! Right after we touched down, my friend Al Buhr picked me up at PDX. We went up to see Tim Rajeff across the river and check out Rajeff Sports. He quickly grabbed a bunch of rods and put them up on a machine so we could check out the strain of where they broke.

Picked up an Echo Gheko rod for my 5-year-old Connor. The MPR extender (mini practice rods) that turns it into a 2 handed rod will be fun to play with indoors. Also grabbed a new instructor rod that is bright white in color which I plan to use for camera work. Tim will be out here for the SE Conclave in Helen, GA toward the end of April which will be great!

The tying tables were loaded with Salmon and Chrome tyers with super flashy flies. Many varieties of Intruders for the winter steelhead run. The tube fly revolution is big in the area. Many of the great tiers from around the NW were there and it was great to catch up with some old friends and meet some new ones too! The tubes around here offer many advantages overall. I like the idea of not having to waste loads of extra hooks and tungsten on patterns.

I also met Dave Dozer at the show who makes some wonderful bamboo rods. Had fun trying many of the various actions on the casting pond with Mary Ann Dozer. I will try to get up a few pics of the classes in the coming days too! Thanks to Dwight Klemmin and Al Buhr for making it all happen over the weekend. It was great seeing so many familiar faces at the expo!

The continuing education class was great Sunday but went by far too fast. Continued Education for the FFI was an idea that David Lambert and myself thought up in around 1995. You can cover many topics when you get that many great casters together. I got a very nice intro to Spey casting the two-handed rod after the class out on the pond from Whitney Gould. It was just great overall to learn how awkward my bottom hand was for making casts! It will take loads of work for this to become a natural and consistent flow for me! I learned where these ideal positions should be for the overall stroke from Whitney -even though I found it difficult to make them all come together at once!

Spey Casting in the Northwest

While the dynamics are identical overall with single and double-handed casting, I found the two-handed stroke to be a great lesson in humility! It made me feel like a beginner all over again since in no way could the body be in the correct positions during the casting stroke since it was new. The bottom hand plays a large role in setting it all up overall because it has to flow into the correct position. Just like the tracking issues with the single hand casting the double-handed rod has to be engrained in the motor skills throughout the stroke.

I am looking forward to the practice sessions in the coming months! The mini Spey sessions at home have been a blast switching the hands around. I can see big payoffs doing this on the water down the road depending on the severity of wind and obstacles.

The class covered one of the secrets of fly casting which I entitled “Understanding the invisible pulley”. In fly casting, we direct energy for either a cast or a setup for the placement of the line. The pulley concept is one I use to explain where we accent the force for either one. Most casters when they are new to fly casting spend all of their time throwing line. Casting a loop is different than throwing a ball to direct energy. The circles and figure-eight motions used in fly casting can take advantage of varied power. Use your imagination of the invisible pulley for rod in power followed by rod out of power. I learned this language from my friend Al Buhr around 2008. northwest ffi expo albany

This is no doubt language for the poets! The engineers remain baffled how the rod can be in motion and be out of power! Remember that it is all about intent. We accent varying amounts of force when making casts (actually various throttle positions for accelerating the rod). This simple concept opens up a myriad of opportunities for fly casting. It also places your rod position during the ebb and flow of motion to be in the correct setup. I will use the same outline that we presented in OR for the SE conclave in Helen, GA for the continuing education program toward the end of April.