Understanding fly rod balance, swing weight, deflection, and frequency are a few of the significant factors found from the WCU fly rod study. One of the first impressions the caster feels when picking up the rod is its balance. The figures of balance which are included in the data are derived by taking the balance point of the rod divided by the length of the total rod for a percentage. You may compare balance points quickly when shopping for a rod by balancing the rod on a flat object such as a credit card or a knife.

Measure from the butt of the rod to the balance point for making a comparison. The lower the percentage may translate to a more comfortable feeling when holding the rod. This is dependent on the rod’s overall weight. The rods which received the highest ratings by the group were typically less than twenty percent.

The weight of the tip is important for conserving energy when casting. The angler constantly holds the rod up throughout the day. For example, assume the tip-top weight to differ by .25 of an ounce. Not only does this affect muscle fatigue in the shoulder since the rod is a nine-foot lever, but it also adds up quickly when performing casts. This could easily translate into several hundred pounds of additional work for an all-day casting outing. This influences directly the rod’s balance and overall weight. The casters did favor the rods with the lightest tip-top weight typically less than .5 of an ounce. 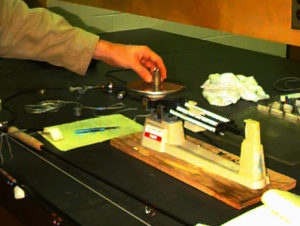 The rod’s overall weight is noticed when the caster picks up the rod. The balance and weight data can be reproduced by most individuals strictly by feel when comparing one rod to another with great accuracy. This is performed by gripping each rod and judging the weight and balance. The human element for these types of tests is highly accurate even by the novice. The rod’s weight is sometimes labeled on the rod courtesy of the manufacturer. Many of the rods were off in claimed weight versus actual weight more than the entire tip-top section of a two-piece rod (27% of the actual weight)! This may be performed by using an accurate scale when comparing rods. 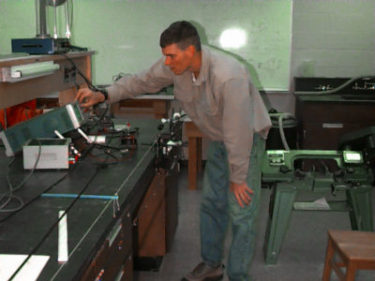 The overall weight displacement and balance point to an imaginary fulcrum away from the fly rod’s grip is called swing weight. It is the feeling of the rod in motion being rotated. Swing weight to a physicist is called “moment of inertia”. Think of swing weight as the fly rods resistant to being swung in a circle. Swing weight is a huge part of fly casting for the “comfort” and “feel” of a rod’s action. Poor fly rod swing weights tend to never be sought after from beginner through advanced because they are uncomfortable to cast. 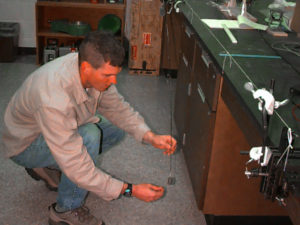 The deflection test provides data for the stiffness of the fly rod. Mount the butt of the rod in a perfectly horizontal manner for measurements. A rod butt vise is aligned with a string and adjusted with a laser. The measurements were made in the middle of the rod (54), three-quarters of the rod (81), and the end of the rod (108) when the rod was deflected with a weight of 2.48 ounces. Each of the readings was divided by the perspective length to that point to obtain a percentage of deflection. For example, the rod deflects 22 at the tip, divided by the length of 108 this would provide 20.37%. This provides enough general information as to rod deflection.

You may perform a couple of different tests for comparing two rods when shopping. The first test is to place the rod tips on the ground while holding the butt end at your eye level. When you apply equal pressure to the rods, you will begin to see differences in the manner in which they deflect. In general, the faster the action the less the deflection. This may provide greater hooking power and hook sets. It also loses a bit of the potential energy within the rod meaning you must exert a greater force when roll casting. An advantage of medium actions will yield greater deflections which provide increased control over casting the line and landing trout.

William Hanneman came out with this method for discussing the deflection of fly rods in about 2001. He coined the name “Common Cents System” for measuring fly rod actions. It is a good start for telling the consumer more information about overall fly rod action once you understand what deflection ratios mean. Our results from the WCU study did not find deflection to be all that significant. Quick dampening, overall weight, balance, and swing weight were most significant for rod performance and feel.

One of the problems with simple deflection calculations is that you can easily have a low-quality rod that matches a high-end rod on the simple deflection. The low-end rod may still be total JUNK! As an example, what if the low-end rod takes a long time to dampen because the tip end of the rod is heavy? This will affect “rod feel” because you are holding a lever with the weight disbursement too heavy away from your grip! It will affect rod balance, dampening, and most important swing weight of the rod. Simply looking at a tapered cantilevered beam with deflection data leaves out many important attributes that we found significant during the rod study. 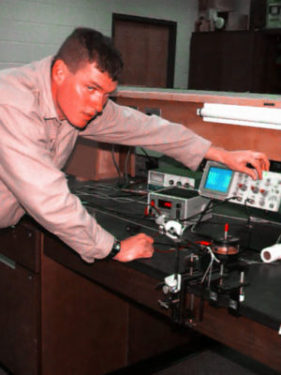 The term continuity is used to describe the transfer of energy from the caster through the rod. There may sometimes be a rod that has a soft spot within the rod usually somewhere toward the tip. This is sometimes the case with poor rod designs. This causes experienced casters to reject the rod quickly because they are not comfortable to cast. The rod may hinge toward the completion of the cast which feels as if the rod attempts to jump out of your hand.

Sometimes the rod hinges toward the butt of the rod which may be uncomfortable to cast because the rod recovers with increased recoil, hence moving the caster’s hand up and down. This is typical of poorly designed tapers for slower rod actions. These types of continuity problems are difficult to pick out without the assistance of actually casting the rod. As a rule of thumb, if the rod does not feel comfortable at the completion of the cast keep searching. There must be unity from the entire system of the caster, rod, line, and fly when fly casting. Do not confuse continuity problems with lack of adjustments made by you the caster. It is the casters ability to adjust the timing and application of force to the rod when casting various rods. 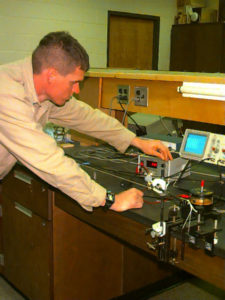 The frequency test provides accurate figures for the fundamental frequency. Frequency is the condition of occurring at frequent intervals given varying inputs of force. Data was also collected for the 2nd and 3rd harmonic for rod frequency. The data will show the numbers for the frequency which activates the rod measured in Hertz. Fly rods exhibit many frequencies when actually casting. All casters possess varying physical features that enable them to exhibit a certain range of force. For example, a young child may not generate enough force to load a rod. It is for this reason that no single rod design is suitable for all casters. The higher the frequency number in the data may imply a faster action depending on the deflection and dampening characteristics as explained below.

Shake the rod side to side with a different tempo is called the wig-wag test. Experienced casters tend to have accurate first inclinations as to the assessment of the rods frequency. For example, a few of the casters shook the rods while blindfolded and stated the actions as fast, medium, and slow. They accurately described all of the rods with these general terms. They also picked the top ten rods of the entire survey simply by feel.