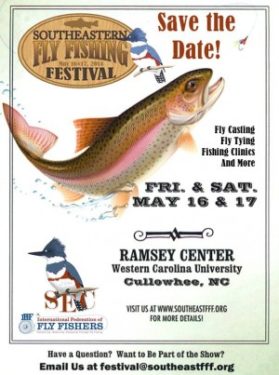 The Road Not Taken & Fly Fishing

Learn to fly fish NC from a poem sounds rather silly overall but I have always been fond of the Robert Frost poem, “Two roads diverge unto a yellow wood” from the Road not Taken. Last year we had a visitor from Wodonga, Australia for several weeks named George Forster (pictured below). We had never heard of George at the time except on a few instructor forums for the Fly Fishers International.

George impressed me with drive and enthusiasm traveling halfway around the planet for total immersion in all things fly fishing! George tested for his Master Casting Instructor certificate from the FFI at the campus of WCU in 2014. He exemplifies the types of people you meet in life that you instantly admire. He was also a great musician which was no doubt part of his ability to learn, teach, and discuss things at a very fast pace.

David Lambert and I came up with the idea of having continuing education (CE) in 1998 at the Southeastern IFFF conclave at Callaway Gardens in GA. It has become common now for (CE) to be offered at FFI conclaves globally! Continuing Education helps to ensure fly casting instruction is pushing the envelope forward! 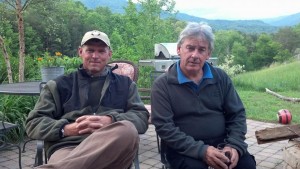 A long day at the SE FFI Conclave in Bryson City, North Carolina

The “Road Not Taken” (Robert Frost) poem matches the philosophy in regards to all fly fishers around the globe. The parallels of the poem relate for me the humility of fly fishers sharing and the prideful bunch content in mediocrity. Teaching, learning, and growing for students of the game of fly fishing is always evolving for our journey. The journey of our personal growth in all things fly fishing!

We have been blessed in many ways being able to teach since college all over the world techniques about this great sport. Trout fishing instruction is problem-solving for creating more effective methods to teach! The school of “hard knocks” is powerful in that it makes us appreciate much deeper many concepts of angling. I am deeply indebted to so many other instructors that have shared with me from all over the world. Fly fishing is one of the most literate sports out there! Fly fishers choose to head down a road of humility or the road of pride. 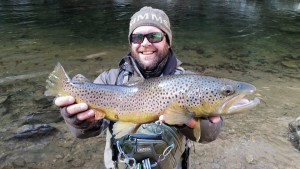 Those that head down the road choosing humility are not afraid to fail! Fail is an acronym for First Attempt In Learning! The more failure occurs the closer success is at hand! This new learning will lead to successes the next time out on the stream. The past experiences help to assist you in new discoveries. Ask questions for improving your trout fishing! Maybe that is a fly pattern, a certain tactic or technique, fly casting, and many other things for angling on the stream.

The best anglers and fly casters are willing to share information much more than keeping it locked up. Embrace your failures as they are your finest teacher over time and will help you later to appreciate your successes! Fly fishing requires that for the problem-solving game on the water.

My mentors over the years were very generous at sharing information! All that was required was to ask the questions. Jim Green was one of my biggest influences as a teenager. I knew fly fishing would turn into a career when I graduated from Westminster College. Jim would often compose a 6-page letter (front and back) explaining topics in regards to fly casting.

This from the man that started the graphite rod revolution at Fenwick worked for years at the Sunset line company, and World Champion record holder with many casting merits. Jim was born in 1920, so whatever he would write and explain that would be my goal to play with until it made sense to me. Some of the topics took me a very long time for them to become clear since he was 43 years ahead of me by birth. He was and will always be a legend to me for being such a class individual and taking the time.

Another mentor from my youth as an eight-year-old kid was an old tobacco farmer on Camp Creek in Greene County, TN. I never knew his name but he offered up a handful of Red Tagged Daiwl Bachs to me. He was my hero from that moment on, even though we never saw him again! He was very proficient in catching many nice trout using the Daiwl Bach patterns. For decades I thought he had invented the pattern. To my surprise, I later found out that it had been around nearly 400 years in Ireland!

Those fly fishers that head down the other road of pride are constantly being set up for one big disappointment every time they go out to the stream. Same as in the game of life. The anglers that stay too prideful tend to exaggerate constantly great tales from the river. Stay stuck in trees or river banks most of the day because they think that is common. The reality is their casting still looks just like a beginner.

They disappear around the bend when they see someone doing well on the stream. Tend to fish with a Thinga-ma-bobber every time out the door because that is their only tactic. Not a thing in the world wrong with floating indicators because they have their place when the time is right! They make excuses constantly about everything imaginable. Yet they remain too proud to ever ask someone for help.

But I Fished Alaska!

We have all had the client that is the new self-proclaimed know-it-all since they fished Alaska one time! We call this a guide’s worst nightmare. You will not be able to teach this person a thing! He already knows way too much from his one-time adventure fishing in a place where a bare hook would work. Pride blocks people’s ability to learn new things. The creel study (click link) backs this up if you need more proof.

Remember that the study showed only a .003 of anglers caught way more numbers of trout? Well, they also asked the question to those surveyed about their level of skill. Over 40 percent claimed to be advanced intermediates and 35 percent claimed to be advanced! Over 3/4 of the fly fishers surveyed thought much higher of themselves than what they could produce. Chances are most of them are still at the same level today as when they began.

Many of the prideful fly fishers will remain in denial that the creel study is legit. The results you achieve on the road taken or not taken is totally your decision. Choose it wisely because there is already plenty of prideful folks out there on the stream. You have no doubt probably already met a few. The road for improvement to occur is totally up to you and what you choose to do about it.

The very best dollars you can spend is on quality instruction in order to get it right for what is important when you practice. If you cannot afford it then make it a point to fish with those that are much better than you and swallow your pride. Take a kid fishing this spring and it will be much more satisfying assisting them in laying down some solid fundamentals.