A Few Thoughts on Streamer Fishing for Probing New Waters

Streamer fishing has been around for a very long time in fly fishing. The workhorse patterns I used mostly as a youngster include the simplistic Black Ghost, Mickey Finn, Wooly Bugger, and Muddler Minnow. There are hundreds of new streamer patterns in the past decade with so many new choices of materials. Many of the newer patterns have eye appeal more to the tying community than the fish! A successful pattern is the one you can tie simple and fast. few thoughts streamer fishing

A lot of egos at play in this game of fly fishing to think of lashing a different material to a piece of wire and a new invention that everyone tries to get in a catalog for their pride basically. It is actually quite funny when you think about it. Think about judging your streamer patterns by how many steps does it involve? Can you produce it in a short time period? Naturally color, shape, and size are also at play just like every other recipe in fly tying. The action of the fly may be important at times, however, there are also times it really does not matter!

Keep It Simple for Streamer Patterns

I remember tying up some really bizarre streamer patterns in the mid-’90s when I capitalized on what I refer to as “impulse strikes”. These patterns made use of things like a silver beer tab glued to a hook or a piece of coffee cup Styrofoam attached to a hook. One material basically attached to a hook! They worked on many test occasions for trout just like the simple buck-tail streamers used in the 1930s. Keep it simple with your patterns and you will get more time on the water, which is always better than the time at the vice as far as I am concerned.

There is no doubt that streamer fishing puts up the majority of really large fish throughout the year. It is also among the simplest technique to learn for a youngster. Both of my kids have had plenty of action at very young ages swinging streamers over fish. One of the reasons it is the perfect technique for folks new to fly fishing is that the fly line remains under tension as the pattern swings in the current. When a fish strikes it is hooked! few thoughts streamer fishing 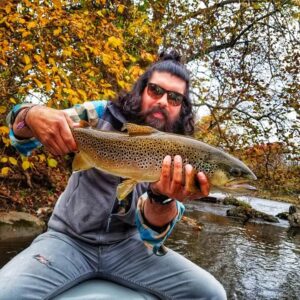 Here are a few other streamers that have served me well over the years. The Bullhead Sculpin from Gary Borger (you can find it on his blog) is one of the best producers on the stream and is among the most simplistic patterns to tie. One of the best days on the lower Nanty a few springs ago had 6 brown trout to the boat while floating that all went over 6 pounds. Not a bad day to kick off the season since this is no New Zealand in Western North Carolina. We have to compete against hardware fisherman, worm drowners, and corn chunkers-many of our best tailwaters in the Southeast is an open game. The acoustic footprint and color of the bullhead sculpin make it among my favorite overall streamer patterns!

The other fly is a pattern I learned from Rich Brostic here in Bryson City back in the early ’90s. It uses only two materials which include a black chenille body and an olive marabou wing as long as the hook shank. This simple pattern has caught thousands of really big fish all over the globe. You can tie it in under a minute at the vice. Mike Sexton’s “Blank Saver” is another smallish streamer that works great and deserves a row of them in your fly box! You can tie a ton of them in one evening!

Folks progress to really big streamers that are articulated. Air resistance increases may require a much heavier line. I am sure that over the years the one to three-inch streamers has been the most productive. I have hooked many Muskie in western North Carolina when fishing for trout with three-inch streamers.

Streamers Fishing Is All About Rate of Retrieval

Streamer fishing is all about movement so use varied retrieval rates. Changing the direction of the streamer through the use of mends is more advanced but it often can be productive against a bank or differential water current. Play around with different fly line configurations and densities for streamer fishing. One of the most common mistakes I see is the overuse of floating lines used for attempting to catch big fish that hold near the bottom in big water. Build some high-density lines that get your flies down where the fish are holding.

Streamers are great for probing the waters to find where the fish are holding. Once they are located often times we go back to the same area with different techniques. The big advantages of using streamers are you can cover vast amounts of water!

If you fish with other folks try to get your group to mix it up! Your group will learn far more about a watershed throwing nymphs, dries, streamers, and wets! They will all produce fish. Bigger nymphs are often fished like a streamer just for the sake of mixing it up. Enjoy playing around with streamer fishing and remember it is more about your technique than the fly!