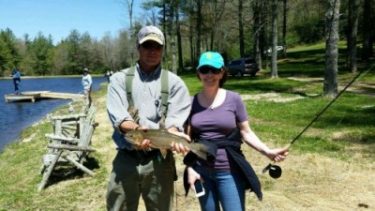 The fly fishing report for Bryson City, NC provides information on conditions and activity on local streams. The water early in the week has been high on the Tuckasegee here in Bryson City. It is off-color most of the week but has improved a little each day. Look for heading into the park streams like Deep Creek, Noland Creek, or Forney Creek during the rain events of spring. They clear up the fastest close to town. The Upper Nantahala also clears up quickly after heavy rainfall. The Tuckasegee due to the development along the river tends to stay colored here in Bryson City the longest of all. Guided float and wade trips have been busy as always for the month of April here in Western NC! 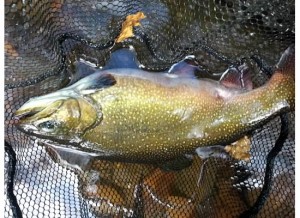 A Fat Brook Trout from the Delayed Harvest

Bugs have been active the past few weeks still with March Browns, Hendricksons, Black Caddis, and a few Quill Gordons if you are lucky on the wild streams. The overcast days this week have had an explosion of activity near the surface. Take those bobbers off midday and swing wets or throw multiple dries for the best activity of the day. Watching the behavior of trout explode through the surface is much more exhilarating than float fishing anyway, right? Make sure you have a bottle of Frogs Fanny filled up this time of year because it can get emptied in a hurry. 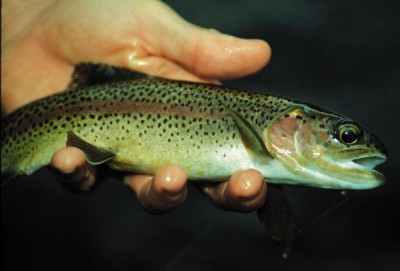 Looking for some more rain next few days here in Bryson City. When water is stained it most likely clears overnight for Smokies streams and the Nanty. Look for flies that stand out in the stained water. Attractor patterns that stand out like squirmies, black and chartreuse streamers or nymphs, and even dark dry flies for stained water. Should get a chance to post a bunch of fish in the next few days from trips. April is always full on here with the activity on the stream.